The Multirobot System Group´s team from our department is heading to the Mohamed Bin Zayed International Robotics Challenge (MBZIRC) international robotics competition that will be held in Abu Dhabi on February 23-25. Three years ago, our team won a complete series of medals. It was the best in funding, picking and delivering items with the aid of a group of fully autonomous flying robots and finished second in the autonomous landing on a moving vehicle and third in the Grand Challenge competition, along with the Padova University. This year, the team has advanced to the contest final in the UAE on a continuous first place out of the 200 registered teams. It will compete with its drones in three disciplines, informed the Info.cz and Seznam.zpravy.cz. The competition is about the effective cooperation of various autonomous robots. The new challenges include wall building from bricks, and locating and also extinguishing fires. 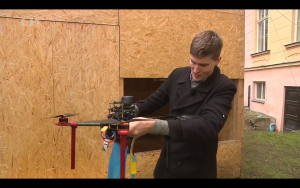