The results of the DARPA SubT Challenge finals were announced on Friday 24 September at a ceremony in Louisville, Kentucky, United States. The CTU-CRAS-NORLAB team finished second among the top ten robotics teams in the world in the viral competition, earning a $500,000 prize.

“We were mainly focused on the main competition with real robots, so coming second in the virtual competition is a pleasant surprise. The result shows the possibilities of the technical solution we have invested in, thanks mainly to the DARPA subsidy. The fact that our solution works so well in the virtual gives us a promising perspective for working with the real system as well,” says Prof. Tomáš Svoboda, team leader. The team finished sixth in the real robot race. 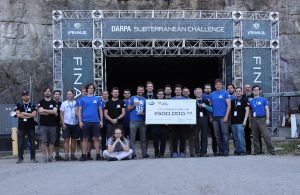