Instead of a UFO, a great horn. A graduate of our department at ETH Zurich develops a method to reconstruct blurred objects

Drone footage from 2016 captured an unknown, fast-flying object in the US state of Utah, and many people have since lived under the assumption that it was a UFO. Five years on, on June 4 this year, it was proved that it was in fact a Great Horned Falcon. A detailed analysis of the available footage using the DeFMO method contributed to the refutation of the UFO hypothesis. The researcher behind the special algorithm, which can reconstruct the original object from a single blurred image, is Denys Rozumnyi, a graduate student of Prof. Jiri Matas from the Visual Recognition Group.

Denys Rozumnyi started developing his research five years ago during his undergraduate studies and continues it during his current PhD studies at Europe’s top technical university, ETH Zurich. He started with the detection of fast moving objects, then added trajectory calculation and finally reconstruction, or sharpening, of a blurred moving object. “Thanks to my time at CTU FEL and ETH Zurich, I was able to combine two worlds – the detection of fast objects and their 3D reconstruction,” says Denys Rozumnyi.

“The main applications we had in mind when developing the DeFMO method are in transportation or sports. The goal is to teach autonomous vehicles to react to sudden dangers or, for example, to detect the speed of a serve or the rotation of a ball in tennis or football,” Denys describes the initial motivation. The use in UFO identification did not occur to the author of the method, but it belongs to basic research that it finds application in unexpected applications and contexts. “The code is publicly available, so anyone can use the method,” he adds.

A single image is all it takes to identify an object. The method works based on machine learning. Training is done by first synthetically blurring the sharp image. Then, in a given number of iterations, the algorithm tries to reconstruct the image and remove the blurring so that the result is as close to the original as possible. Once the algorithm has learned to reconstruct the objects well enough, it is able to “sharpen” the blurred images very convincingly, even in real time. What is fascinating is that the method does not need video or multiple images as input. The algorithm only needs a single frame! The blurring of the object in the image is caused by motion, and therefore the trajectory of the object and the object itself can be reconstructed retrospectively.

The results of the research project, in which the Faculty of Electrical Engineering of CTU is participating alongside ETH Zurich, were presented by Denys Rozumnyi on 25 June at the best industry conference in the field of information technology – CVPR (Conference on Computer Vision and Pattern Recognition). But it doesn’t end with sharpening one image. In collaboration with top scientists from the Swiss ETH University, the Faculty of Electrical Engineering of CTU and the Academy of Sciences of the Czech Republic, Denys Rozumnyi is pushing the method to greater perfection. His algorithms can already reconstruct a blurred object into a 3D model.

What next? “The next research direction is to use multiple images. For us, this means much more information. We can see a moving object from several angles and see how it moves. This is crucial for 3D reconstruction,” Denys says of the next plans.

The revolutionary method is in the basic research phase. But the source code is open and we see the first example of its use in practice in the UFO case. Anyone else can find a use for the clever algorithms, and the collaboration of companies like Google and Microsoft on research will certainly speed up the deployment of the methods in practice. The researcher says: “We can already make a video with 30 frames per second into 1000 frames per second.” It seems the time when everyone will have a “high-speed” camera in their pocket is not far off. 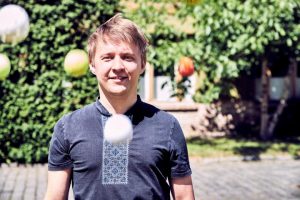