Nature inspires drones: Robotics imitate the flight of a flock of birds

In recent weeks, our researchers from the Multi-Robot Systems (MRS) group have been testing low-flying swarms of autonomous small multi-engine helicopters (drones) in the desert environment of the United Arab Emirates. A stabilized swarm of low-flying robots equipped with a neural network camera flies over the inhospitable terrain of the desert. It is ready to look for people in need, land and give them a first aid kit.
“During the implementation of this project, we were inspired by nature. Flocks of birds or fish schools are equipped with a sensory organ that allows them to stick together and react to a situation, such as avoiding a predator. Our swarm mimics this group movement, autonomous robots exchange only a minimum of information during the flight, yet they proceed in a coordinated manner,” says Dr. Martin Saska, leader of the MRS group.
Simultaneously with the possibilities of using a swarm of drones in humanitarian operations such as “search and rescue”, the robotics team from FEE CTU in the United Arab Emirates also researched the use of drones in rescue operations in multi-storey buildings, especially in case of fire. In the United Arab Emirates, there is a great demand for alternative firefighting systems, given the number of skyscrapers and solvent clients living on the top floors. 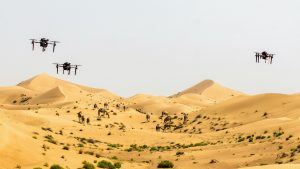