Tomáš Svoboda discussed on DVTV with Martin Veselovský the future of transportation systems and autonomous vehicles (in Czech). Many thanks for successful representation of our department!
read more →

Our colleague, Assoc. Prof. Tomáš Svoboda (Center for Machine Perception, Center for Robotics and Autonomous Systems, was invited to the Magazine Leonardo (in Czech) of the Czech Radio Plus channel. He discussed (in Czech) about a rescue robot called TRADR. Many thanks for the representation of our department!
read more →

Data fusion for localization and mapping 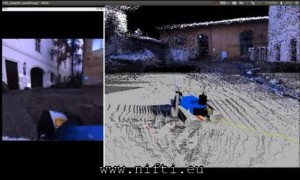 We design and evaluate a data fusion system for localization of a mobile skid-steer robot intended for USAR missions. We exploit a rich sensor suite including both proprioceptive (inertial measurement unit and tracks odometry) and exteroceptive sensors (omnidirectional camera and rotating laser rangefinder). To cope with the specificities of each sensing modality (such as significantly …read more
read more → 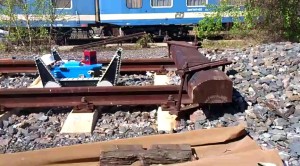 Adaptive traversability we understand by means of autonomous motion control adapting the robot morphology—configuration of articulated parts and their compliance—to traverse unknown complex terrain with obstacles in an optimal way. The robot measures its state (like: orientation angles, flipper mode, …) and the terrain (digital elevation model). We learn the optimal policy from loosely annotated …read more
read more →